Our Future in Print 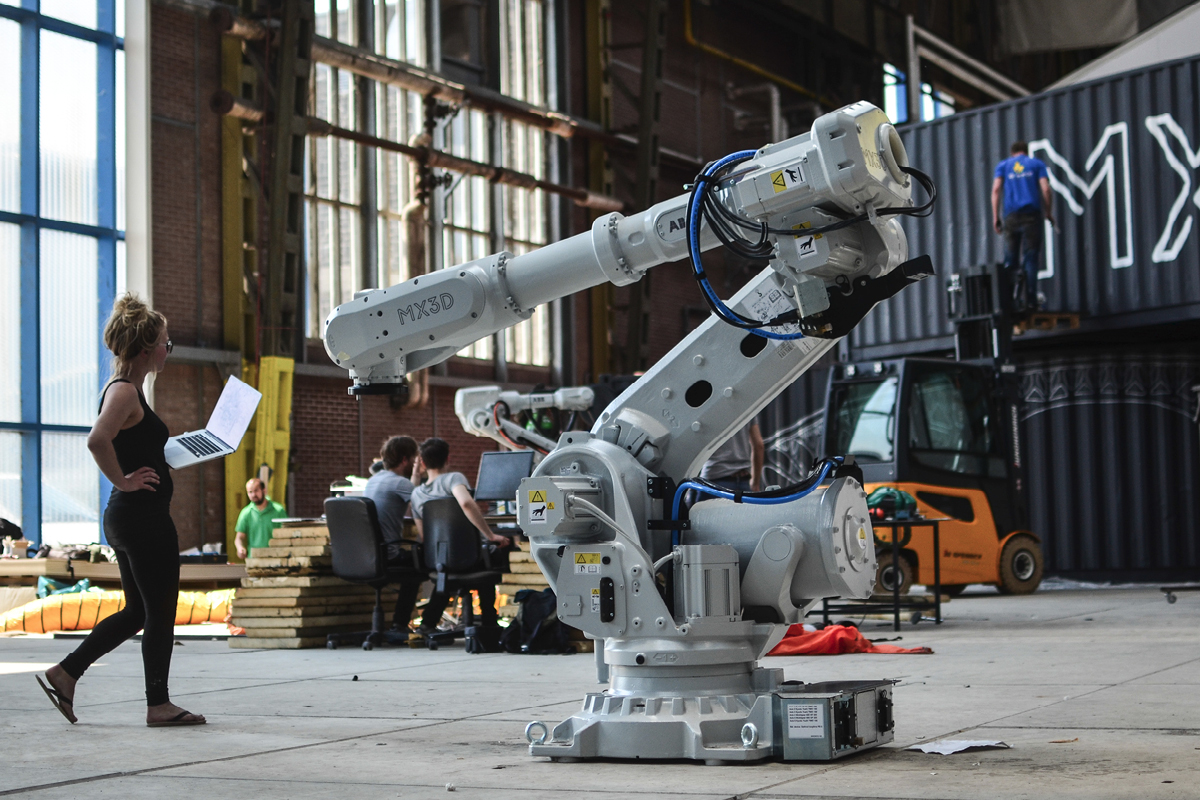 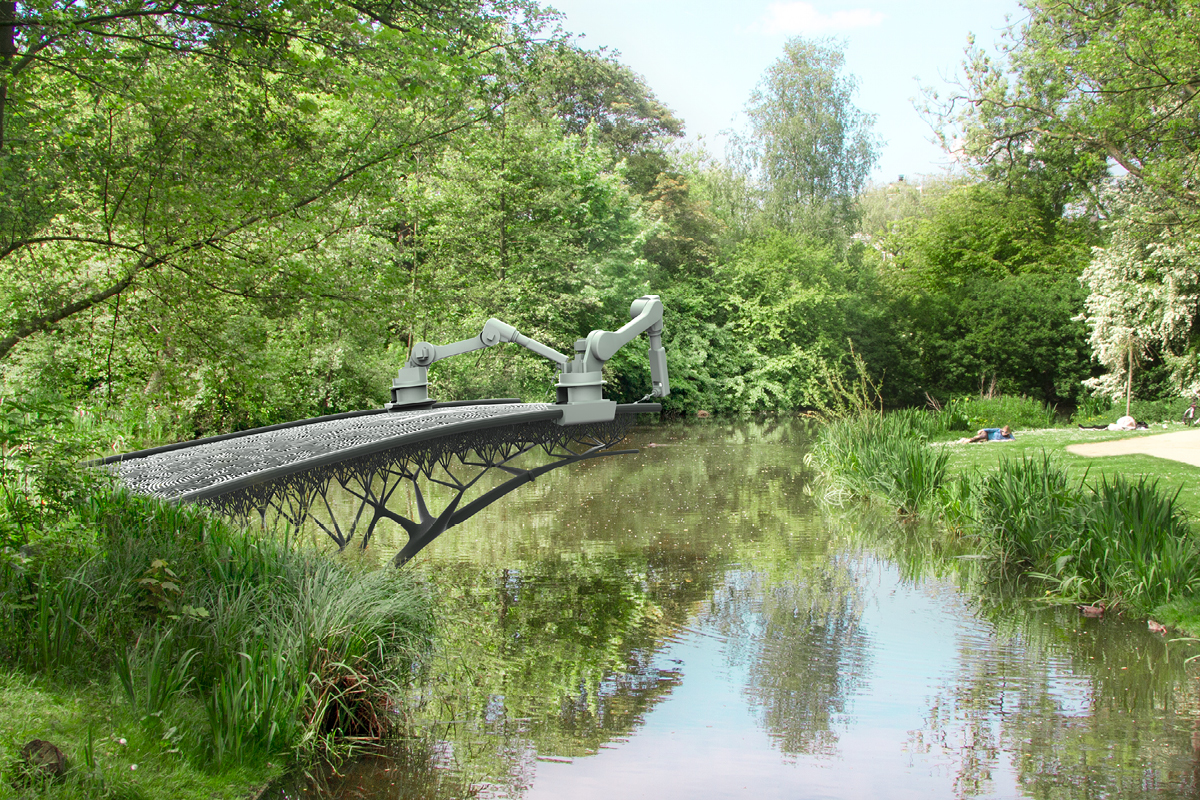 Vondelpark Bridge, build/print as you go. 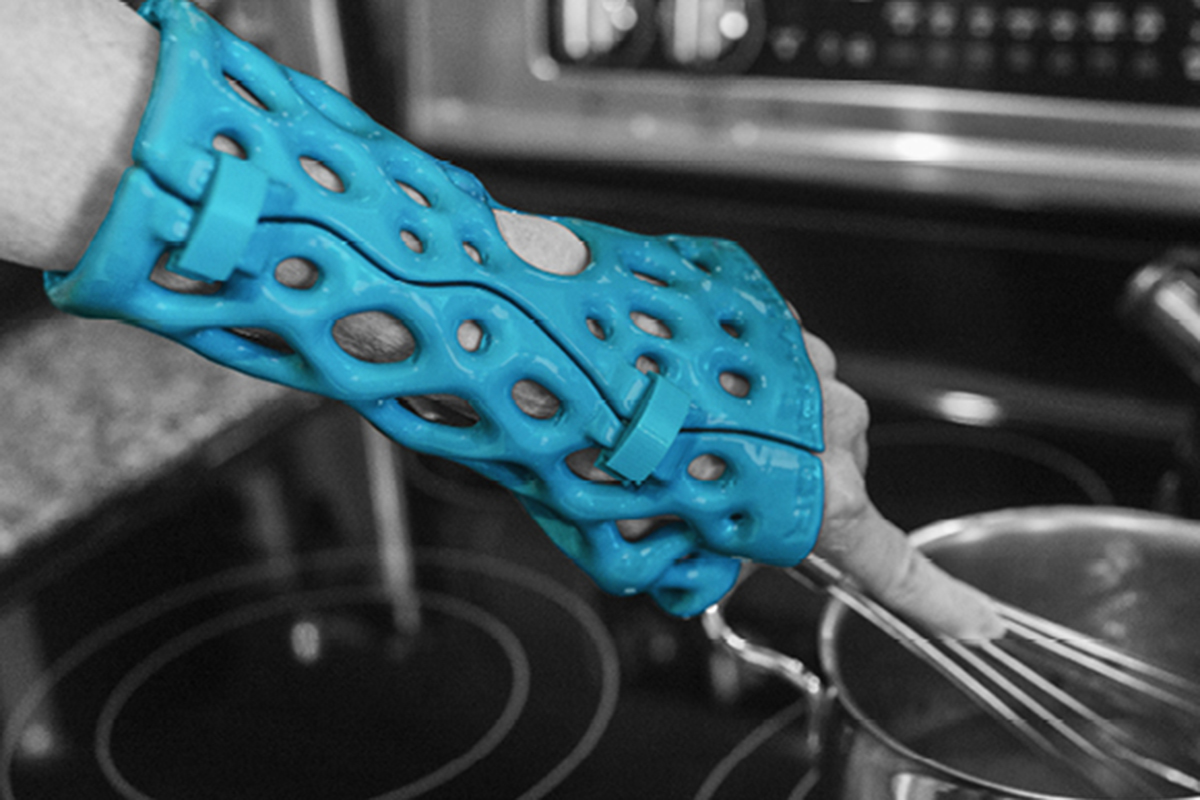 A woman wearing a 3D printed thermoplastic cast by ActivArmor.

One of the great things about science fiction is its ability to predict or inspire the future (depending on how you see it). Reading Dick Tracy in the 30s, who would have thought you could have a video call with a hand-held device? Watching Star Trek in the 60s, who wasn’t envious of the communicators? Just flip them open and you can talk to anyone, anywhere. Even Star Trek in the 80s gave us the Holodeck, where we could immerse ourselves in a virtual reality. All of these creations have come to pass and are now part of our everyday lives.

Through all of these, though, and many more, there was the idea of the replicator or fabricator. This is a common device among future societies, one where you can put in your request and the machine will take the available building blocks and create whatever you want, right there and then. The idea being this saves manufacturing time and energy. You get what you want, when you want it, and you only need to transport raw materials which can be used for anything, not pre-made, single purpose supplies.

Now…once again fiction is becoming reality. 3D printing is getting better and better and is changing the way we look at everything.

3D printing is not necessarily all that new, depending on how you measure time, but like a lot of modern technologies, once the initial breakthroughs happen, the development becomes exponential rather than linear. The singularity is approaching fast and this holds for 3D technologies as well as it does for everything else.

All of which begs the question: What exactly is 3D printing and what does it mean to and for me?

To start with, 3D printing is literally creating a physical object in three dimensions. This isn’t a hologram or lenticular picture (those cool plastic images which “move” when you look at them from different angles), this is an actual object with length, height, and depth. It was originally created by and for designers to come up with a quick and easy way to make a prototype of something to check its viability.

The first designs were back in 1981, where the process was additive. Layer by layer a polymer would be built up into the desired object. The term used was rapid prototyping and it was just that. But then the thing happened which always happens in this situation: technology got ahead of itself. It’s like quickly running down a hill, and your feet get going faster than your torso. Sometimes you trip. But sometimes you start to run even faster than you ever thought possible.

This is what happens with technology. As soon as the first rapid prototype machines were developed, naturally people started making better and better devices. Not only better in terms of quality of finished product, but also in terms of materials used. The printers became so sophisticated, companies started using them for small runs and personalized products. Game manufacturers have started to release 3D printer files for enhanced game figurines and a multitude of websites have appeared to crowd-share designs for things which would be impractical to impossible to mass produce.

You may have even seen this technology at work as a novelty. Many tourist sites are now offering 3D printed sculptures right next to the traditional caricaturist, space-scene spray painter or the person who spells out your kid’s name in faux tropical designs. Here, you can have a three-dimensional scan of your body made (and yes, there are places where you can do this nude) and a few minutes later, you walk away with a completely unique keepsake.

All of this, however, is mere trifles, fun and games with a new toy. It’s the other, more practical side of 3D printing which is far more interesting.

Starting with the large scale, there are now 3D printers which can build houses. Granted, there are some differences between a printed house and a house created through regular construction means, but they are easily overcome when you look at the time and cost involved. Skipping over the initial outlay for the printer itself, a small, 409 sq. ft. home, can be built for around $10,000 in about a day.

Granted, that’s not very big. That’s okay. If you have more time and money, a Chinese company recently took 45 days to build a 4300 sq. ft., two-story mansion, which, they claim, can withstand an 8.0 earthquake.

So we can run the gamut between small and economical and large and lavish in terms of size. On the down side, the printer can only make the frame. The pipes and plumbing need to be framed out first, but again, that’s not much different than traditional construction techniques. In either case, though, imagine bringing one of these machines into an impoverished land where local lives could actually be changed by having solid structures constructed quickly to provide shelter, schools, shops, and anything else needed for a small village.

More so, not all of these printers use concrete as a base material. Some use recycled materials and some use the earth itself. So you can plop down a 3D home printer, load it up with local ingredients and let it do its thing. Even better, you may not even have to send the whole machine over, just a small 3D printer, which can then print up the larger one.

Even at this stage, it seems like a win win. And as technology improves, printing homes is going to become even more efficient and cost effective. There’s a homeless population or an area has been devastated by a natural disaster? No problem, print some housing.

But what if during that natural disaster, a bridge gets wiped out? 3D printing has you covered there, too. Sure, making a bridge out of concrete or earth might be a bit difficult, so thankfully, there are now 3D printers which work in metal.

As of 2015, a company in Amsterdam has successfully printed and is currently testing a steel pedestrian bridge to be installed later this year across the Oudezijds Achterburgwal canal in the Red Light district. I suppose it makes sense the first 3D printed bridge is in the Netherlands. Wanna bet Venice is next?

All of this can certainly lead to some interesting places. Already, the Additive Manufacturing Machine, designed by Lowe’s, has been installed in the International Space Station to custom print parts for repairs and experiments as needed, but it doesn’t take a crystal ball to see future practical applications: Understanding how to build shelter and infrastructure from available materials seems a surefire way to get a lunar or Martian colony underway.

Closer to home, modern medicine is making use of this technology to immediately improve the lives of patients.

While there are a number of 3D printed cast companies out there, only ActivArmor is currently available in the US. They are all made from thermoplastic and look like a hard webbing. The advantages of these designs, over the traditional plaster cast, are numerous. Not only are they light weight and water friendly, but depending on the manufacturer, the extra features can range from adjustability to accommodate post-injury swelling to having electronic plug-ins for monitoring or other medicinal usage. All of them are designed to give the physician easier access to the broken limb and the days of having to find a coat hanger to scratch an itch are over. They’re also 100% unique, custom fitted to the patient based on a three-dimensional scan. Also, ActivArmor is FDA approved and accepted by most insurance carriers. The only downside is you have to wait 2 days in a company supplied temporary splint before you get your cast.

If you need more than a cast, 3D printing is also making huge inroads in terms of other medical advancements as well. Open Bionics in the UK (coming to the US hopefully later this year) is printing arms for below the elbow amputees over the age of 9. The “Hero Arm” is, according to their website “the world’s first medically certified 3D-printed bionic arm, with multi-grip functionality and empowering aesthetics,” which means it looks good (with changeable skins to fit your mood – or give you a pop culture look) and will allow the wearer to flex a fistful of fingers, including an opposable thumb, to pick up and manipulate anything a normal hand could do.

Weighing less than a kilo (2.2 pounds) itself, the Hero Arm can lift about 8kgs (17.64 lbs) and comes complete with haptic sensors as part of a “A full suite of tools that give you feedback on the status of your bionic hand.” And since it’s printed, the fit is impeccable. The socket is dynamic, meaning it will compress and expand to maintain the wearer’s comfort level in whatever condition they may find themselves.

Beyond the external, 3D printing is even encroaching on the internal.

Bioprinters invented by Harvard researcher Dr. Jennifer Lewis are using the 3D printing technologies and framework, along with a dissolving ink media, to create a sample tissue containing skin cells and is interwoven with a material which can possibly function in the capacity of blood vessels. Sure, there’s some hesitation, but the progress is being made.

Beyond that, researchers are experimenting with printing bone scaffolding, which will encourage bone growth anywhere in the body; heart valves which are about to begin animal testing with future hope for human trials; and even ear cartilage. There are labs which are using printed liver cells for testing new medicines, while top industry executives are cautiously optimistic there will be full printed organs, ready for human use, within a decade.

There’s an old saying in medical technology that goes “if you can live for ten more years, you will live forever.” Now, sure, that saying has been around for a while, but it actually seems like we might be getting close to the point where organ transplants will be a matter of merely ordering one from an online shop and having it installed at your earliest convenience. For the next generation, or the one after that, this could be their reality.

That’s the thing about relative reality. Thirty years ago, we couldn’t have imagined the Internet and fifteen years ago, Facebook didn’t exist. Now, not only can’t we imagine a world without them, it’s impossible to exist in the world without them. And it looks like 3D printing is going to be the next revolutionary ubiquitous technology to make itself indispensable to our lives. From fast prototypes to bespoke limbs to whatever future body and building modifications the users can come up with, the future is a click away.