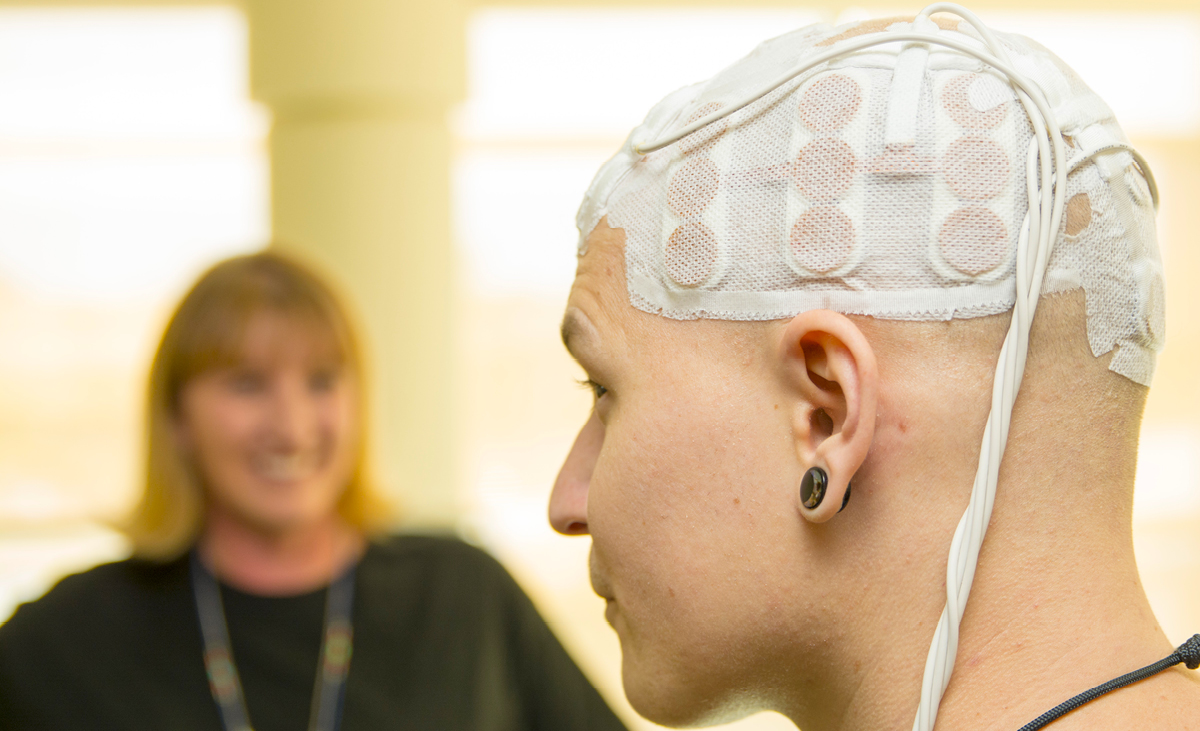 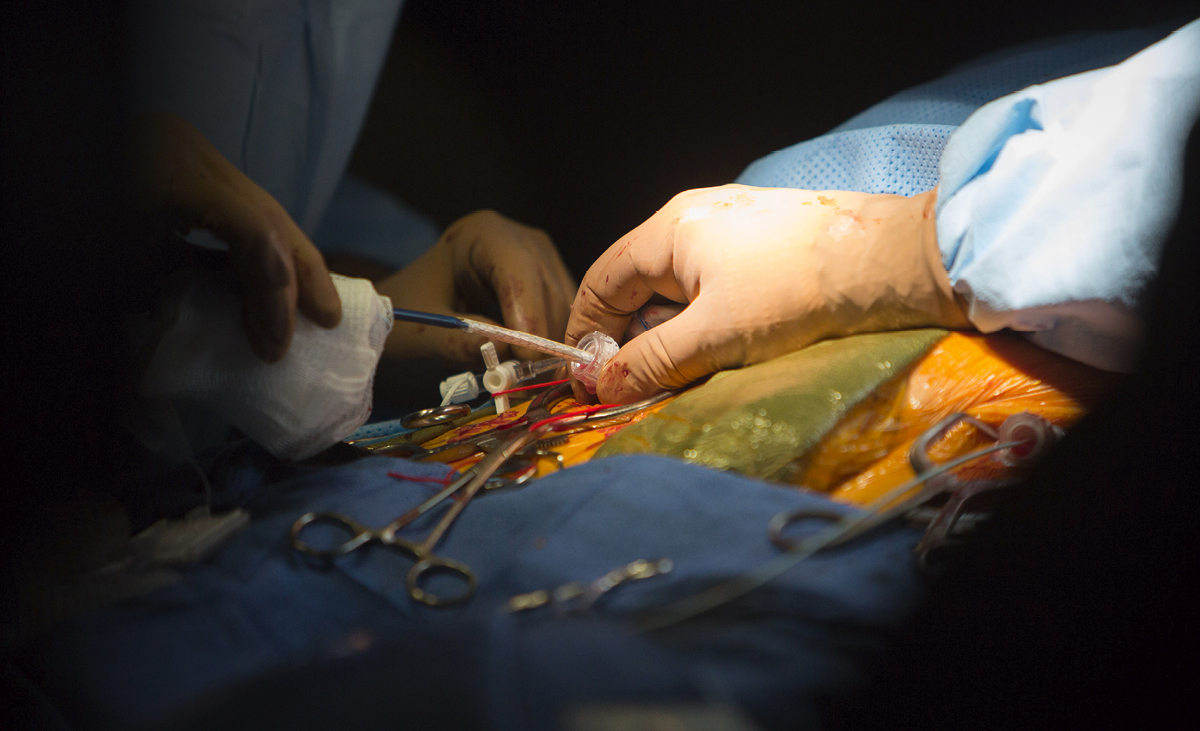 Surgeons operating through a patient’s femoral artery in the leg. 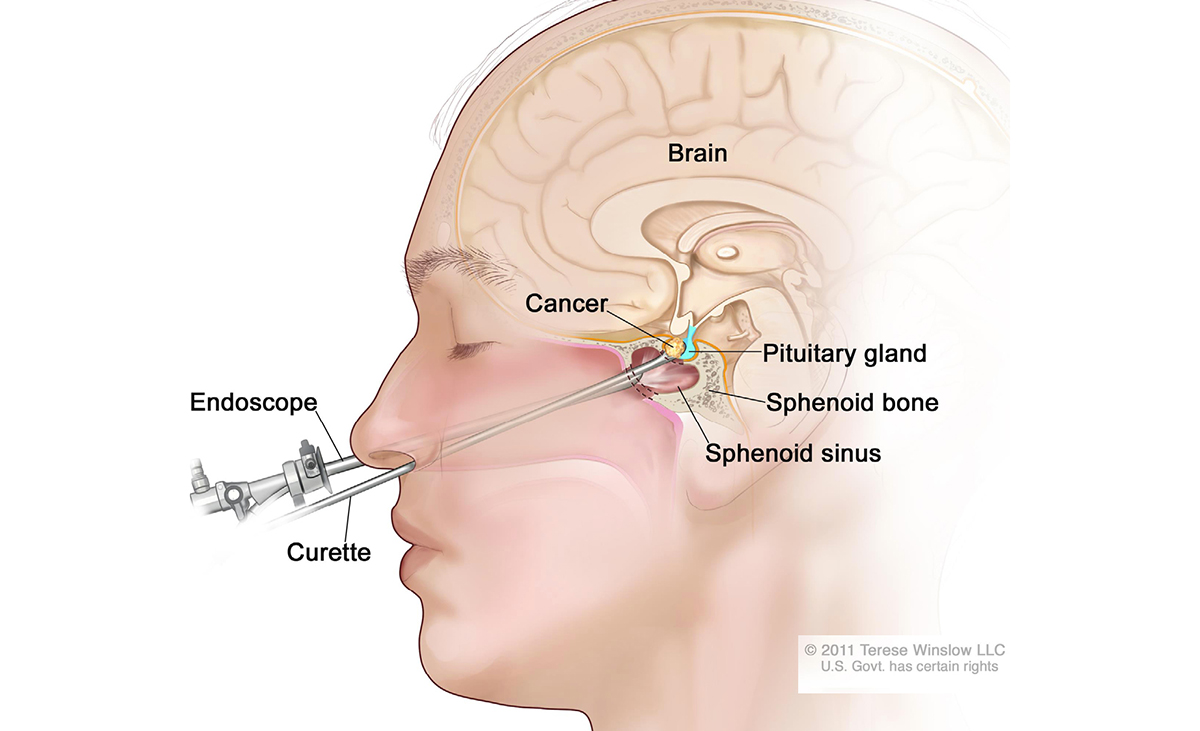 Medical science is amazing. These days we can transplant organs with relative ease. If we can’t get something donated, there’s a possibility that we can “grow” it ourselves or manufacture an artificial replacement, which might work better than the original. Replacing lost or damaged limbs also is becoming an everyday occurrence. So the fictional lore of Steve Austin, the Six Million Dollar Man, keeps getting closer to reality. It seems the only thing we can’t replace is the human brain. That has a limited lifetime warranty. If it breaks, we’ve got to fix it. Thankfully, here in the Vegas Valley, a number of physicians are working on that very problem – and making remarkable (excuse the pun) headway.

One way to advance medicine is this area is by looking for alternatives to traditional approaches. “Back in the day, we would go in and operate, then just give regular radiation. What radiation treatment is is a fancy X-ray that kills cancer cells. We’d give it to the patients after surgery to mop up what could be left behind, ” says Dr. Susan Reisinger, a radiation oncologist. “When you go in and operate on the brain, they can’t take extra brain for good luck.”

Sometimes the surgeon is able to get all of the cancer, she says, sometimes part of it and sometimes just a small piece. In that instance, the hope is that the excised piece can be used to figure out what is going on and how to deal with it. The only problem, Reisinger says, is that “after surgery, this darn (cancer) wants to come back.”

So, various treatments have been employed to try and extend both the patient’s life and quality of life. “It’s not all about curing somebody, either,” she says. “It’s about quality of life. Nobody wants to live longer if they can’t move the whole right side of their body.” Different forms of chemotherapy and radiation treatments have been tried, and a drug called Temodar has been added to a number of regimes with positive results, she says. “Some of those patients were doing pretty well – some of them out to 18 months with a pretty good quality of life,” Reisinger says. But that wasn’t good enough.

When cancer grows, it divides exponentially into many cells. Researchers have found that high-intensity electric fields can interfere with the process by not allowing those damaged cells to divide. This type of treatment has been shown to slow – maybe stop – the division of cells. Some cells may even die, Reisinger says.

About 10 months ago, Optune came along. It’s a device for running an electromagnetic current through the brain, targeting the specific cancer area. Certainly, you need the diagnosis first (Optune is FDA-approved for Stage 4 tumors only), but the outlook is positive. This approach also means you’re not cutting into the brain again. But Optune patients have to be committed to the treatment, as the process involves wearing strategically placed transducers on the scalp 18 hours a day, seven days a week, for at least six months.

These transducers, whose placement is designed by computer and administered by specially trained nurses (who will also teach the patient’s caregivers), trail electric wires attached to a battery pack. “The electric fields come through the battery pack to the wires to these adhesive things,” Reisinger says. “You can go anywhere with it. You can go out to eat. You can do anything you want. (But) think of just being attached to something. It’s not an easy thing.”

Still, the Vegas Valley resident since 1998 calls it one of the more positive developments she’s seen in more than 25 years of practice. “I remember during my residency, patients would come down in stretchers, and there wasn’t much you could do… In my personal experience, I’ve seen a huge increase in the quality of life, and how long patients live with (drugs like) Temodar,” she says. “But you’re still back to ‘yes, it will come back.’ It’s not ‘will it come back? It’s ‘whenwill it come back?’ So if you can put something like Optune on it from the get-go, maybe that’s just another way.”

Dr. Rajneesh Agrawal certainly takes “another way” in getting to his treatment area of expertise. To treat “disorders of the blood vessels of the brain from inside the arteries and veins, with catheters and needles,” he goes through the patient’s femoral artery in the leg.

“Cardiologists do the stents into the heart,” the endovascular neurosurgeon explains. “I do stuff like that into the brain: treating strokes, treating brain aneurysms, but all from inside the blood vessels.” To do this, he uses X-rays and dyes to maneuver his catheters through a small incision near the groin, up the spinal column and into the brain. The brilliance of this relatively new approach — it was developed over the last 20 years or so — is that there’s no cutting into the skull. In fact, the initial incision is so small it often requires no sutures. And, in cases where there are no complications, patients can go home within a day or two.

Agrawal’s primary concerns are brain aneurysms (a “ballooning” of an artery) and strokes. “With stroke patients, if a patient throws a blood clot into an artery in the brain and becomes paralyzed or loses speech, and they come early enough to the hospital, we’re able to go inside and suck that blood vessel out and open the artery.” But how do you get there? “We know the anatomy. I know the route. … It’s like knowing how you get home. I know my traffic spots. I know where to go. I’m using X-rays to ‘see’ where I’m going.”

What he’s looking at are specialized 3D X-ray machines designed specifically for the job at hand. “We’ve got extreme clarity as to how the catheters are going so we can really see these catheters go through very small areas. We’ll inject some contrast dye to see how the flow is, and I can guide my way around.”

In practical terms this means if a patient presents with symptoms of a stroke within six hours, his chances of significant recovery are the best they’ve ever been. In most cases, Agrawal and his team can “open up the majority of the clots within 30 minutes … we know that 9 million brain cells die every minute, so we try to do this fast.”

As recently as 10 years ago, when someone had a stroke the best outcome was to put her through a rehabilitation program and hope for the best. “There was really no treatment for it,” Agrawal says. “Now, for a lot of patients, we can give a better outcome, even make them completely symptom-free. From paralysis to symptom-free, which was not possible (in the past).”

In the “dark ages” of the ’90s, aneurysms were treated purely by surgery. The surgeon had to cut through the brain, a much more invasive and dangerous approach. Now, most aneurysms that Agrawal and his team treat are done by “coiling.”

Using X-rays to guide the tiny catheters, Agrawal maneuvers to the aneurysm and fills the weakened space inside with soft, spaghetti-like metal coils. These secure and strengthen the walls of the blood vessel and close up the hole.

When Agrawal came to Las Vegas 19 years ago, this technology was new. “I was the second person in Nevada to bring this technology,” he says proudly. “At that time, the equipment was very old and we kind of started from scratch here. Now, I have three hospitals (Spring Valley Hospital, Valley Hospital and University Medical Center) with state of the art equipment, all the products that I want.” He handles 150-200 cases a year.

“About five years ago,” he adds, “there was a meeting and they were saying the field is probably going to grow 15-20 percent per year for the next 10-15 years. It’s still a new field, with a tremendous possibility of growth.”

That “growth” includes educating more people about symptoms, so those patients can get treated sooner, with ever-higher success rates. It also means treating diseases not being handled this way, including brain tumors. “Can we go in – inside the brain tumors – and selectively inject chemotherapy?” Agrawal asks rhetorically. “Right now, if you have a malignant brain tumor, (the) survival rate is about six months. Options are surgery and radiation (and Optune). Now, can we go in from inside the blood vessels and do gene therapy, selective chemotherapy?”

And there’s another way.

For Dr. Ashley Sikand it involves transphenoidal surgery. He and his associates, including Dr. G. Logan Douds, go after brain tumors the new-fashioned way – through the nose. “Many decades ago, they used to do this type of surgery with an ‘open’ approach,” Sikand explains. “They used to have to open the skull and lift up the brain to get to the tumor and remove it that way. This approach is done through the nostril without making any incision on the outside.”

Primarily, Douds and Sikand are treating meningiomas and pituitary tumors, the two most common types of tumors located in the skull base, the area “between the nose, the sinuses, the portions of the ear and mastoid, and the face – between those structures and the brain.”

The pituitary gland, the body’s master gland, controls all the hormones and hormone production. It rests in the skull base. “It’s an important part of the brain,” Sikand says. “It sends chemical signals to the thyroid gland to control its functioning and to the adrenal gland to control steroid functioning.” A malfunctioning pituitary can cause hormonal problems and lead to vision issues and headaches, if a tumor is pushing up on the optic nerve.

Using “image guided surgery,” the surgeon basically overlays an MRI “roadmap” onto a monitor. Then, using telescopes and microscopes, he opens “that sinus up by finding its natural openings and joining them, making them larger.” This gives direct access to the entire “Turkish Saddle,” or sella area, where the pituitary gland and the tumor reside, allowing for removal of the latter. Any instrument the doctor inserts into the nose or sinus shows up on the screen and moves in real time. “This allows for more complete tumor removal,” Sikand says, and a “lower risk of injury to surrounding structures that you want to preserve. At the conclusion of the removal of the tumor, the patient doesn’t require any stitches on the outside or anything like that. You let it heal and it makes the recovery easier.” As with Agrawal’s patients (and barring unlikely complications) that recovery can be accomplished at home, requiring only a day or two in the hospital.

Sikand, another Vegas Valley resident since the late ’90s, also has seen a big change in the way things are done. “When I first started doing it, we didn’t have the image guidance; we weren’t employing some of the endoscopic procedures we’re using now. Some of the reconstructive techniques have been modified by the development of biomaterials that didn’t exist 15 years ago. I’ve seen an evolution, even in the last 15-16 years.” But, then, he’s also helping lead the pack, doing his own research and publishing a peer-reviewed paper annually for the last six to seven years.

And like his colleagues, he’s excited to find ways to push medicine’s boundaries, always with the aim of achieving higher recovery rates amid less invasive surgeries.