A Conversation About Microbial Magic 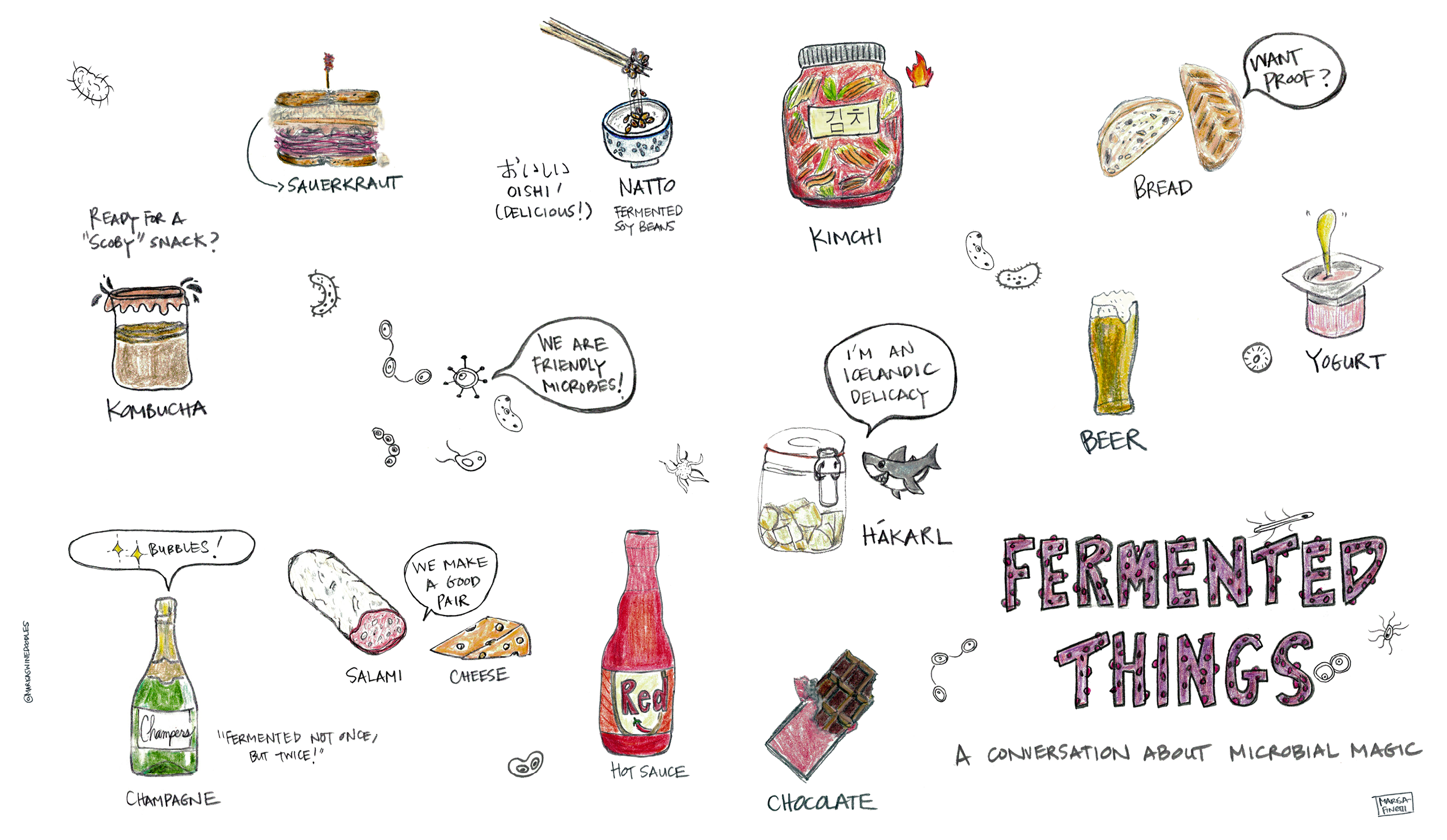 Once again, we’re able to listen in to resident spirits experts Kirk Peterson and Marisa Finetti as they discuss some of the finer points of fermentation and the role it plays in our everyday consumption of food and alcohol. Fermentation, of course, is the metabolic process by which the activity of a bacteria or other microorganisms changes a food or drink for the better.

Marisa: Do you think people appreciate the role fermentation plays in everyday food and beverage?

Kirk: Perhaps more so since making sourdough became popular over the pandemic, but not as much as they could. While fermentation is responsible for many celebrated culinary delights, I don’t think it’s something that’s commonly thought of. I’m sure there are more books on grilling or baking than fermenting. Louis Pasteur would be sad.

Marisa: I’m sure he’s rolling in his grave as we speak. Foods and drinks made through the action of bacteria are just so amazingly flavorful. So many of my favorite foods and beverages are products of fermentation. It’s delicious rot! And these foods are so common.

Kirk: For sure. Humans have been utilizing fermentation to preserve and alter foods since forever. And while many people may think of beer and wine, and maybe even kombucha, when they think of fermentation, they rarely consider salami, pickles, yogurt, or hot sauce. That fermentation is seen as synonymous with alcohol production is to be expected, considering there is considerable evidence that humankind invented grain farming specifically for beer production.

Marisa: And the fact that alcohol was also so important when water was dangerous to drink back in the day.

Kirk: Well, that is an oft-repeated tidbit that is more myth than reality. The idea that everyone only drank alcohol back in the day is attractive but inaccurate. While prior to Louis Pasteur’s discovery of germ theory people did not understand the mechanism of microorganisms causing disease (or fermentation), they clearly understood not to mix the drinking water and the poop water. Much of wine and beer’s life-saving aspects have been somewhat misunderstood by modern people: the real magic of fermented alcoholic beverages back then was as a crucial, preserved source of calories. Starvation was a far greater risk for most communities than waterborne illness. One gram of fat contains 9 calories; one gram of alcohol has 7 calories: alcohol was an essential nutrient. Besides, you can’t avoid water completely and only drink beer and wine…it’s prohibitively expensive. Believe me, I’ve tried.

Marisa: I suppose, in retrospect, it does seem unlikely that poor medieval peasants were living exclusively off of beer and wine rather than water that was free and readily available. But even without knowing about microbes, people still knew to avoid “filth.” And today, when we think of bacteria, we have become so obsessed with getting rid of them. The overuse of antibiotics drugs, antibiotic hand soaps, wipes…we could be killing off some of the good bacteria our bodies need to be healthy.

Kirk: Humans have had a fraught relationship with the microbial world. Undoubtedly, knowing that tiny organisms invade us and cause sickness was a revelation, and the countermeasures adopted saved countless lives. However, the realization that a significant percentage of the cells in your body are symbiotic bacteria in your gut and are consequently susceptible to those same countermeasures is a newer concept. There’s such a thing as too clean.

Marisa: We are still learning to love bacteria. With the rising awareness of probiotics and the benefits of fermented foods, we are starting to replenish our bodies with good bacteria from these foods. Does that mean we can eat chocolate? OK, it’s not the most nutritious of fermented foods, but chocolate is rooted in the ancient technique of fermenting cacao pods!

Marisa: When they harvest the cacao pods, they empty the contents into wooden vats. Inside of the pods are these bitter-tasting white beans covered in opaque slime. As the temperature rises in these vats during fermentation, the milky color turns darker. Then they are laid out and dried on mats and processed into chocolate. Such a delicious transformation!

Kirk: I had no idea. There should be an alcoholic chocolate drink!

Marisa: Also interesting about chocolate is that it doesn’t taste like a fermented food. I associate many fermented foods to have sour or even fizzy characteristics, such as beer, wine, or some cheeses.

Kirk: That sourness is lactic acid, a byproduct of fermentation, along with carbon dioxide, which causes that fizziness. With chocolate, I suppose that acid is obfuscated by added sugar and milk? Those particularly sour, “fermented” flavors probably come from Brettanomyces, a different yeast strain from what causes alcoholic fermentation but one which causes high levels of acetic acid, a hallmark flavor in everything from sour beer to sourdough bread. So, besides chocolate, what’s your favorite fermented food?

Marisa: I would say natto (fermented soybeans) is my favorite fermented food. It’s a popular dish in Japan, where I grew up, made by wrapping boiled soybeans in rice straw that naturally contain Bacillus Subtilis on its surface. Doing so allows the bacteria to ferment the sugars present in the beans. I like to have it with shaved green onions and a splash of soy sauce over hot rice. The pungent smell and stringy little threads of slime disgust people who aren’t familiar with it, but I love it.

Kirk: Meh, disgusting is a relative term more based on familiarity than anything.

Marisa: It’s delicious and certainly not as offensive as when compared to other obscure fermented foods and beverages around the world.

Kirk: As far as I’m concerned, foods are food for a reason, and you should at least give them a chance. Take Hákarl, the fermented shark from Iceland. Historically they had to rely on alternative solutions like fermentation for food preservation, since salt was in short supply.

Marisa: That makes sense because it’s cold up there and you want your food to last through the winter. But rotten shark, though…

Kirk: Not rotten, fermented. They slice the shark into sections, ferment it, then air dry it for several months. When ready, it’s cut into little cubes and served in a glass jar to hold in the smell of ammonia, with some dried haddock and a glass of caraway-flavored schnapps called brennavín. Or at least it was when I had it.

Marisa: And how was it?

Kirk: Not my favorite. It was pungent, the ammonia shoots out your nose and makes your eyes tear, but the actual flavor itself is surprisingly mild. It was better than the McRib.

Marisa: I want to try it! I love learning about all the amazing and culturally specific foods there are. Who was the first person to decide to ferment a shark?

Kirk: Somebody hungry like everything else, I suppose. I guess it’s poisonous to eat unless it’s fermented.

Marisa: Oh, like cassava beer from the Amazon? The one where they chew on the roots and spit it into a jar? Isn’t it poisonous if eaten raw?

Kirk: Similar. Cassava is poisonous if consumed raw, so it must be boiled first, which will make it safe to consume. The fermentation part of it is solely to create alcohol and results from the enzyme amylase in saliva breaking down the carbohydrates into simple sugars that microorganisms can then use for fermentation.

Marisa: I hear it’s been around for thousands of years. One of the first references was written in the early 1600s by historian Antonio de León Pinelo, who described it to be an alcoholic drink made when “girls chew the goo and set it aside in a glass.”

Kirk: I think we’ve got our next hot bar concept. We’ll put pictures of whose spit made your beer on the bottle to give it a farm-to-table feel. Or we could just drink some Champagne - it’s fermented not once but twice.

Marisa: Double the deliciousness, and I love a good, non-spit based drink.

Kirk: Luckily, there’s enough sugar in grapes to start fermentation unassisted. The first fermentation of Champagne is to transform grapes into regular, still wine. Then a bit of sugar and yeast are added to start the second fermentation in the enclosed bottle, which results in dissolved carbon dioxide in solution, the bubbles.

Marisa: The bubbles! Beer, Champagne, the fizzy tingle of fresh kimchi…one of my favorite aspects of fermented foods.

Kirk: We all love bubbles because dissolved carbon dioxide reacts with water to make carbonic acid, which just so happens to drive the sour receptors on your tongue absolutely crazy. That sensation you feel, bubbles bursting on your tongue when you drink something carbonated, has more to do with your taste buds sensing the sourness of carbonic acid than the actual gas bubbles. The burn you feel if you chug a beer or soda, that burn is not carbon dioxide escaping but your body registering a pain response to carbonic acid, just like with the burn of spicy food. Yet that sensation of drinking something carbonated adds a freshness to carbonated beverages that makes them so damn tasty and versatile with food. It’s a factor in why Champagne seems to go with everything.

Kirk: Sure, particularly one with a fair amount of yeasty, nutty flavors and aromas.